The 245th El clasico ended yesterday in Madrid’s favour thanks to goals from Valverde, Ramos & Modric while Ansu Fati scored for the hosts. A clash that was worth talks, especially in the first half. A clash of passion where form didn’t matter. Form said Barcelona would win while Madrid were doing horribly having 2-3 to Shakhtar Donetsk. However, in El Clasico, only the present moments matter. Anything else is just discussion, as Madrid won 3-1.

Koeman’s boldness surprised many. Griezmann & Roberto were dropped for 17 year old Pedri and 19 year old Dest, to the general surprise. Culés thought they had finally seen a bold manager. Unfortunately, paradise turned to hell, dreams were crushed by reality.  Barcelona quickly conceded their first goal, the result of its disorganized pressing. 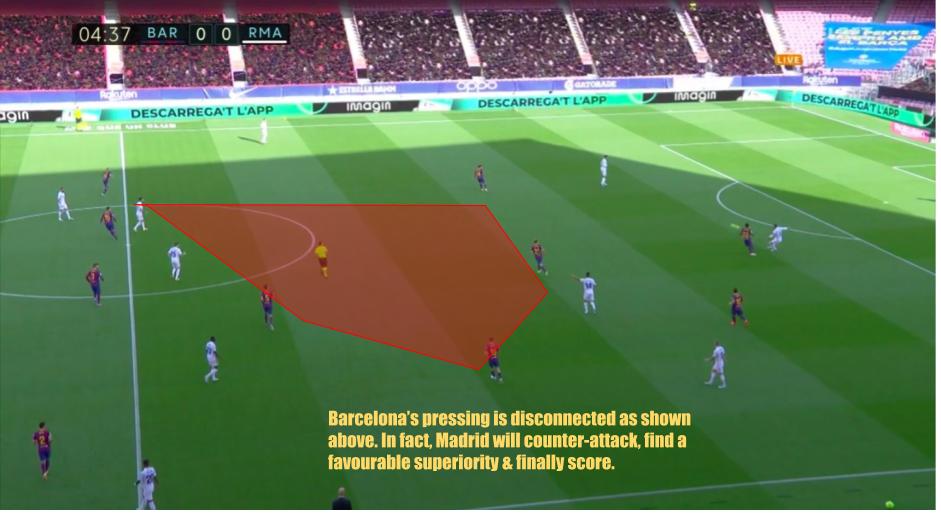 Conceding because of space

A recurrent theme is to be seen in the picture above. The 4-2-3-1 notoriously leaves a lot of space open and can often disjoint the double pivot from its defense and forwards. And that is precisely what happened, this picture preceding only moments before Valverde opened the score in the fifth minute. Barcelona quickly replied four minutes later, as Jordi Alba served Ansu Fati in the box to make it 1-1 in the ninth minute. A harsh battle was announced between the two rivals, a night of excitement. Nonetheless, this double pivot proved to be weak. Neither Busquets or Frenkie De Jong benefit from this system, but Koeman continues to use it. And that is due to the disconnection between the two midfielders.

Frenkie was often making the wrong decision at the wrong moment for the wrong motive. He often put his teammates needlessly in dange, besides misplacing too many passes. On the other side, Busquets had his usual problems. Though he proved to be useful in the attack (He was the only player to attempt line-breaking passes bar Messi), he was defensively far from an excellent option. And with a disconnected double pivot, it’s hard to imagine a functioning XI, especially at Barcelona.

Koeman’s reluctance is worth talking. Madrid replied to its defensive issues very early, subbing off Nacho, and even using Asensio as RB at times to ensure Alba wouldn’t pass through. But Barcelona had two notable problems – the double pivot – and width. Pedri being unable to provide his usual excellence on the right-wing, the right wing was pretty much dead if it hadn’t been for Dest as shown below. 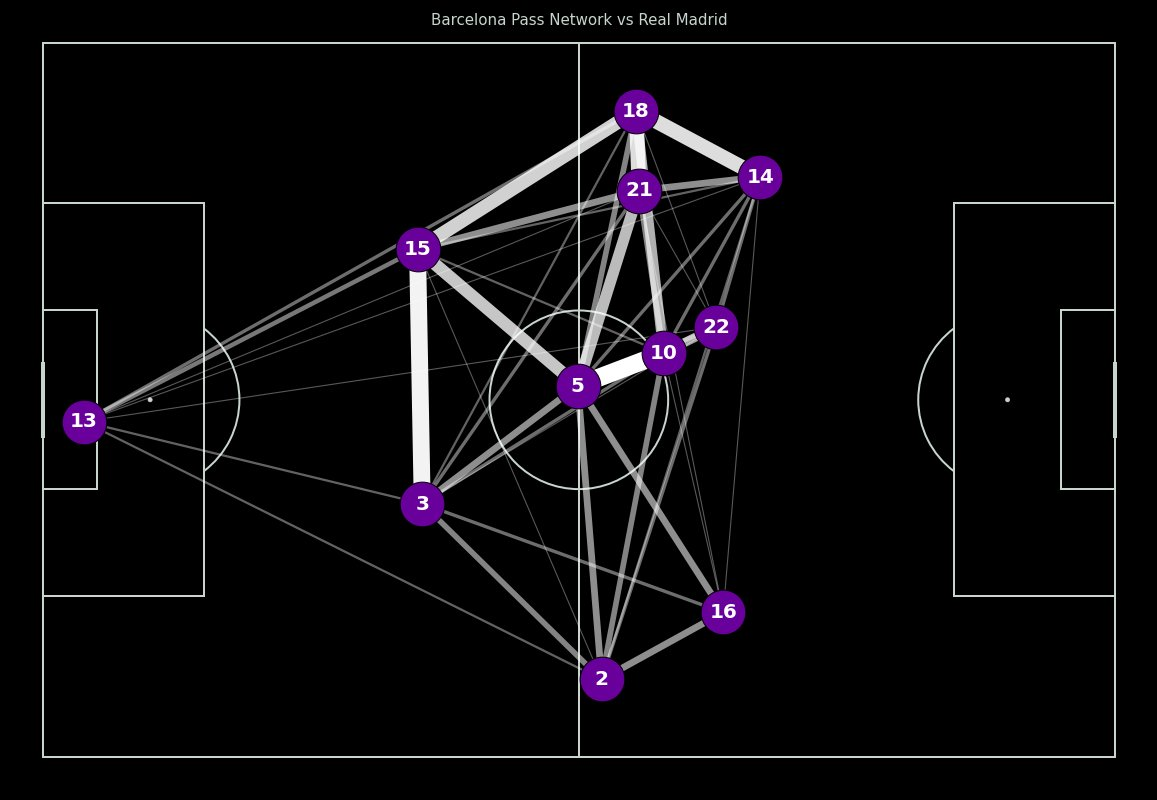 Much of the right-wing needed a revamp, and at half-time, it was time for substitutions. Substitutions that arrived late, to put it in a mild way. By the 63’, Barcelona conceded a penalty following Lenglet’s foul, a penalty that was scored, putting Madrid in the lead once again. By that logic, substitutions were imminent. But that didn’t seem to be Koeman’s impressions, who only chose to substitute in the 80th minute, ten minutes before the end of the game. Once again, Koeman was late, too late with his subs. 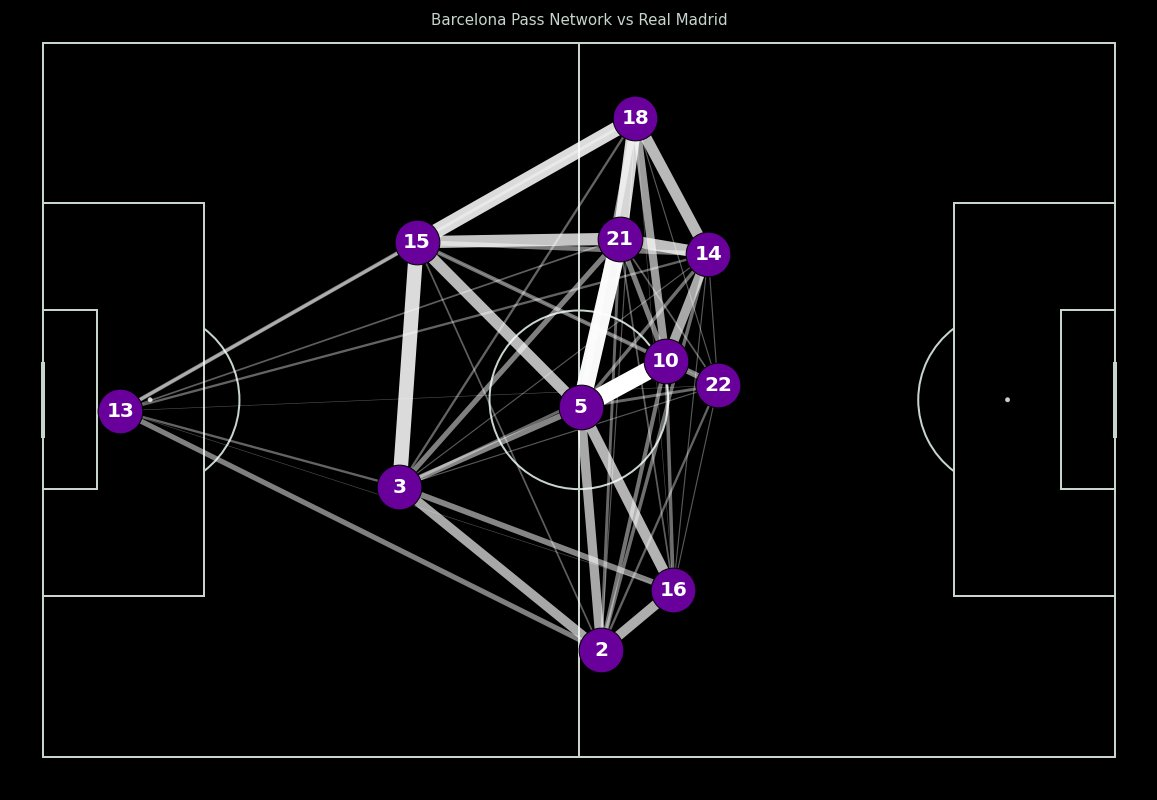 Even worse, the wrong subs came on. It seemed as Koeman subbed his players in panic.(Only bringing on forwards, forcing Coutinho & Messi in the double pivot.) A show in horror, where Koeman made a beginner mistake. Bringing more forwards does not translate into a better attack, or a more functional one. A basic error that you wouldn’t expect to see at such a high level like Barcelona’s. By doing so, Koeman almost removed the midfield which is the opposite of our essence. The domination we love in the midfield is not here anymore. It’s through the midfield that the team create chances, created later scored. By removing the midfield, Koeman removed any chance of proper survival.

Another notable problem had been the defense. Madrid players could freely roam, combine and create meaningful chances without Barcelona intervening. Closing down passing lanes is essential, this being Getafe’s main mechanism of defense against us barely a week ago. Once passing lanes are closed or at least restricted, it becomes harder for the opposition to create. How ironic considering we were experts at combining in tight spaces.

Thus, we couldn’t break Madrid’s defense. Zidane had gradually improved his defense, and we couldn’t break through. There were a few instances where Barcelona had possession and struggled, once again, to break the opposite block. Almost zero intention, sadly enough. When seeing that, creative players that know how to create spaces are essential to break adversary lines. Not like Koeman doesn’t have in Riqui Puig or Carles Alena these profiles, whereas Coutinho struggled due to his heavy one-touch play.

On the positive, though, Fati and Dest have to be mentioned. The 17 year old adapted without particular difficulty to his new striker position and became the Clasico’s second youngest goal scorer having scored in the ninth minute and Barcelona’s only goal. His vision also allowed him to attempt to create chances as well, proving he’s so much more than a goalscorer. Dest, on his side, became the first American to start in El Clasico, and didn’t fail to impress. Almost alone on the right wing, Dest impressed offensively but also defensively, limiting Vinicius.  Dest is showing day after day how much we needed a right-back and what a right-back is supposed to do.