Analysis : Barça – PSG: What to expect?

Barça is set to host PSG in the realms of the last 16 of this year’s UCL in barely 24 hours. For Barcelona fans and just like football fans, the tie has no favourite. However, for Paris, there’s glory at stake – Finalists last season, this clash will be the occasion for PSG to burn down memories of ‘La Remontada’ and take a revenge for the shame afflicted by Enrique’s Barcelona in 2017. For Barça, it’s the chance to prove again their strengths, to put forget Anfield and Münich, time to attempt to get the former glory back again.

There’s little need to remind why the blaugranas are worried. Repeated debacles, such as Roma’s, Anfield’s and Münich’s clearly portray a weak mentality in Barça’s squad, the failure to live up to expectations. A few injuries didn’t help the Catalan either: Ansu Fati, as the X factor, is injured for the rest of the season. The defense has also its problems, notably with the uncertainty of Piqué’s & Araujo’s availability. The two centre-backs are rushing against the clock to be fit against Paris: It’s uncertain who will be available, and the same goes for Dest.

Barcelona’s strength offensively lies first and foremost in their ability to counter attack, particularly thanks to players like Griezmann, Dembelé and Pedri who do not hesitate to attack vacated spaces after having regained possession. PSG’s pressing is certainly far from perfect, but it will be crucial to block Frenkie De Jong’s progress in the midfield, which appears to be back to his best. Barça, despite their past friability at the European level, also has the merit of having a steel mind, for several games.(e.g for example the quarter-final of the King’s Cup against Granada). This could be confirmed in Champions League.

Moreover, the blaugranas tend to get plenty of chances. Indeed, Lionel Messi’s teammates get the most SCA in La Liga (Shot-Creating Actions i.e. actions that result in a shot), with 27.57 SCA / 90 (fbref). By comparison, Real Madrid (second) has accumulated 22.23 SCA / 90. And yet Barça play “without 9”, without Suarez, gone for free to Atletico.

In the meantime, it is Martin Braithwaite who inherited the legendary number 9. This is a clear sign of the Catalan club’s descent into hell since the 2015 treble with the legendary MSN. And while the Blaugrana club have not yet succeeded in filling this offensive deficiency, it must not be forgotten that the club have come a long way. Last September, in addition to El Pistolero’s departure, Griezmann was showing no signs of adapting, Messi demoralized and close to leaving the club. Not to mention Dembélé’s incessant trips back and forth to the hospital bed.

However, Koeman slowly set-up his squad, placing great faith in Pedri and De Jong in the midfield.

Despite this newfound stability, the team is sometimes struggling for the finish. Since the start of the season Barça have scored 1.9 goals / 90, against 2.12 xG / 90. Besides finishing problems, Barcelona are facing issues concerning their pressing: 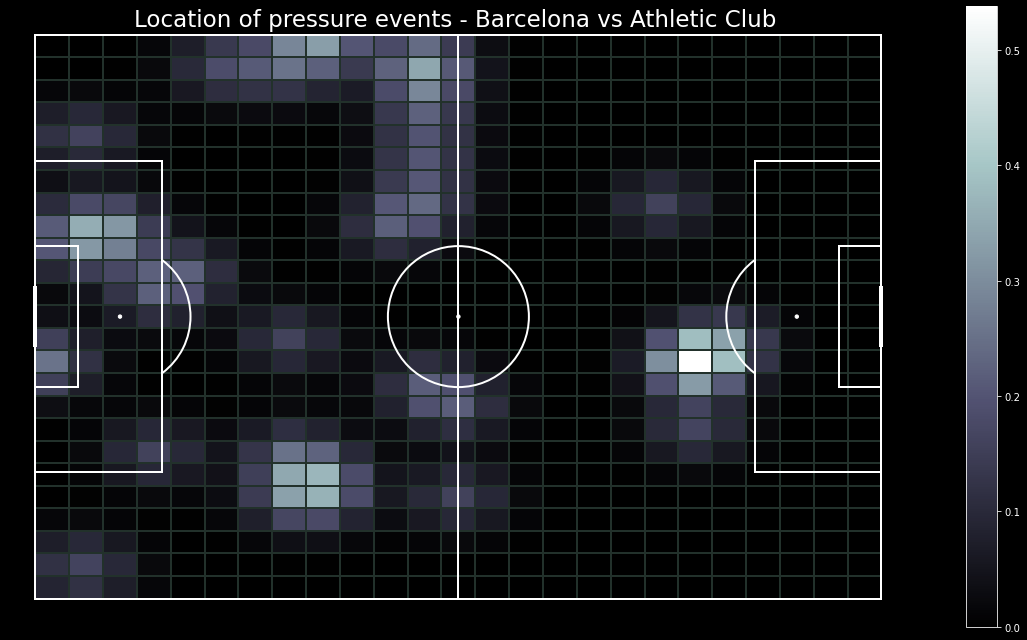 Here is Barcelona’s Defensive Heatmap against Athletic Bilbao. The lack of defensive activity is mind-blowing, and the pressing seems utterly messy. These difficulties probably explain Barça’s defensive statistics this season with 20 goals conceded in 20 games (4th defense). It is for these reasons that PSG have great chances in this double confrontation. Especially as FC Barcelona are far from flawless defensively. On the left side, Jordi Alba often lacks concentration. Furthermore, Lenglet is far from having the speed to cover the calls of the Parisian attack. On the right side, Barca will regret the absence of Araujo who had certain qualities to cover depth. On the other hand, neither Dest nor Mingueza seem sharp enough defensively. 3v2 and 2v1 situations will probably be exploitable by PSG.

The contribution of the players The heatmaps above are very representative of the distribution of Barcelona on the pitch. Shifted left side in the presence of Messi in the center of the game, Griezmann is more and more productive offensively. Since January, he has seven goals and six assists in nine games. And it’s no exaggeration to say that he is important to Koeman. Moreover, that it becomes difficult to live without him. Another key man in the Koeman system mentioned earlier, Frenkie De Jong brings a lot offensively. His late arrivals in the opposing area should worry the Parisian defense. Pedri as an attacking midfielder – sometimes also used on the left wing – is an added danger between the lines. Finally Dembele despite his lack of consistency, keeps the qualities we know.

The positioning of Dembele among the most progressive players in La Liga. And we can imagine that Paris could find itself in a difficult situation against the French (Kurzawa / Bakker …). Even more if the wing is open without withdrawal of the Parisian left winger ( Neymar-Mbappé…). To conclude, Paris Saint-Germain will face in a week a team whose face will be very different from that displayed at the time of the draws.

FC Barcelona still have weaknesses. But they are better equipped for the LDC than they were several months ago. The occupation of space is finally consistent, and the environment has regained stability. PSG are no more favorites – with Neymar’s & Di Maria’s absences. And the Blaugranas have the players to punish the errors of recovery and folds. Nonetheless, Barcelona will still have to remain vigilant given the defensive issues they face.

Positional play expressed through all phases of play, a football fan that fell in love with the Beautiful Game over 10 years ago. Occasionally writes about FC Barcelona for Barca_Buzz, on tactics and attempts to explain the game to the casual eye.