Last Week in La Masia : Barcelona B and Juvenil A with great wins

A tough derby match for Barcelona B against Espanyol with a winner from “Peque” puts the team in second place. Meanwhile, Juvenil A beat Penya Arrabal 5-0 with a hat-trick show from Diego López.

Barcelona B vs Espanyol B 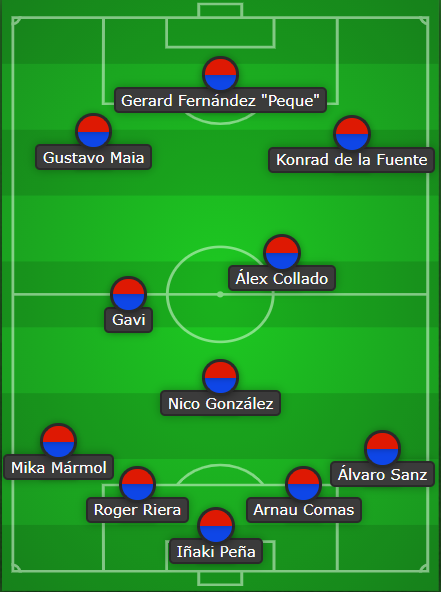 Barcelona B youngsters went into the game intending to fight for a promotion spot. A goal from Peque was enough to seal the 3 points, seeing Barcelona B tied on points with group leaders – Nàstic de Tarragona. After making his debut against Hospitalet Gavi made his first-ever start for Barcelona B. With a chance from Garcia Pimienta, Gavi showed his incredible talent during the game with incredible passing ability, vision and press resistance.

Both teams came into the game fighting for points with both teams having equal chances in the first half. However, just after 20 minutes, Barcelona struck yet with another injury, this time to Alvaro Sanz who could be missing for 2 weeks. In the second half, the intensity of the game didn’t change. After not being able to score in the first 45 minutes, Barcelona B opened the score in the 55th minute with a great volley strike from Peque, with an outstanding assist from Collado.

At the end of the match, Barcelona suffered a lot trying to close off the game, with Espanyol applying a lot of pressure on the youngster. Eventually, even Barcelona started to time waste in the needs of getting 3 points. At the end of the match, we saw another youngster debut for Barça B this time it was Juvenil A’s Ángel Alarcón making him 6th player this season making his debut in Segunda B.

With Ángel debut, Garcia Pimienta gave debuts to 15 youth players during his time at Barcelona, showing his trust in La Masia and the youngsters.

Earning themselves 3 points in derby sees Barça B behind the leaders in second just on goal difference, with 2 games left to play. A single point against Cornella will be enough to mathematically qualify the team for the Segunda A play-offs.

My Barcelona B player of the match: Gerard Fernández “Peque” 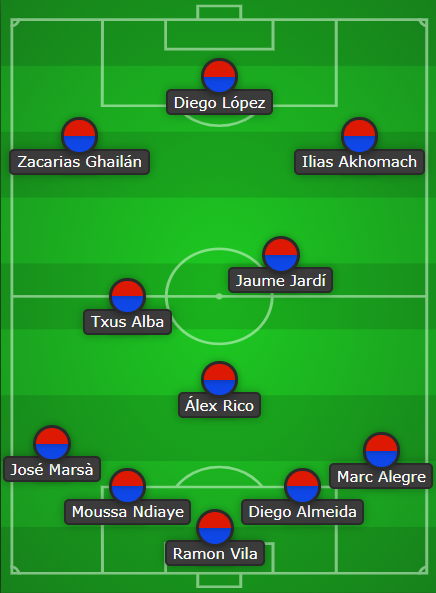 With Gavi and Angel making appearances for Barcelona B against Espanyol B, Juvenil A took out Penya Arrabal without breaking a sweat. A forward line consisting of Zaca, Diego and Ilias were involved in the first 4 goals. After coming back from an injury and being with Morroco U20 Zaca came back to Juvenil A starting place adding himself 2 assists during the game. While Diego Lopez scored a hattrick taking his goal tally this season to 10 goals. Meanwhile, Ilias lifting his confidence as he is slowly improving his numbers and performances after a tough start to the season.

Juvenil A started the game in fashion opening the score in the 14th minute with a back-heel goal from Diego Lopez. Moussa Ndiaye had a big impact in 2 goals scored as he was the player who started the attack with a long ball from the back. The defender whom Barcelona signed for €500k is improving with every minute and soon enough could make his debut for Barcelona B.

Moussa Ndiaye was signed for the B team. However, due to paperwork issues the decision was to let him play for Juvenil A first. This way he’ll be able to adjust to Barcelona football. In the second half with a lead of 3-0 Juvenil A looked as they are winning the game without any problems, however, some good pressure from Penya, made Ramon Vila involved in the action, making some great saves to keep a clean sheet.

And in the 58th minute, a great solo run from Diego Lopez was enough for him to complete his hat-trick. Just before full-time substitutes got themselves into the scoresheet with Brian Pena scoring a fantastic volley assisted by Miki Juanola. Finishing the game 5-0 and earning themselves 3 points.

With Juvenil A on the same amount of points as Espanyol this will make the last matchday quite interesting. As the team will face Espanyol in the derby to decide the leader of the group. As of now the player who benefited the most from Sergi Mila’s appointment as the new Juvenil A coach is Ecuador born defender Diego Almeida who has in the recent games for the youth team.

My Juvenil A player of the match: Diego López