One Month to go : How will FC Barcelona look in FIFA 23 ? – Opinion

by Thomas Karackal
in Analysis
0
0

In 1 month, FIFA 23 will be out, and it’s going to be an exciting edition. Although Camp Nou won’t be there, some new faces will be part of the FC Barcelona squad. We don’t know the official ratings of the players yet. However, in this article we will try to predict how much will FIFA 23 rate our players. This is just an assumption and not the official ratings.

Ter stegen: Another season of inconsistency from Ter Stegen. He rightfully deserved a downgrade in FIFA 22 but remained 90 rated, one of the highest rated goalkeepers in the game, but we all know that he is well below that title. He has had his moments last season, but he is just not that guy anymore. So, it is fair to give him a good downgrade to 87/88, even though 85-86 is more realistic, EA won’t be harsh on him, I think. 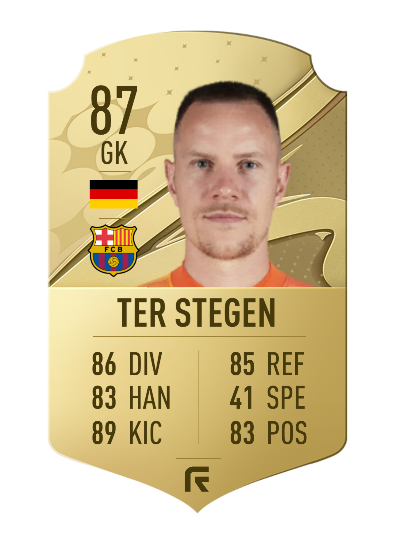 Jordi Alba: Alba had a good 21-22 season, being as creative as ever on the left flank, finishing his La Liga campaign with 10 assists and 2 goals, and let’s not forget that bomb against Atletico Madrid. He should remain at 86, 85 doesn’t sound unlikely either due to his age. 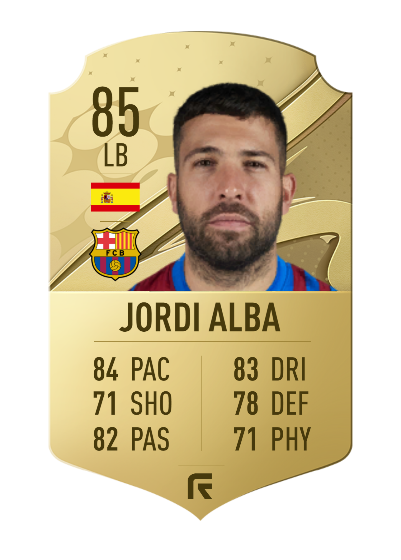 Dest: Dest could receive an upgrade but there wasn’t much of a huge improvement following the 20-21 season. Under Xavi he slowly began to merge into the new coach’s dynamics, but an injury stalled the progress. Right now, Dest’s future is uncertain he could be sold or could stay. In the ratings aspect, I predict he will be in the higher 70’s, definitely not an 80 overall. 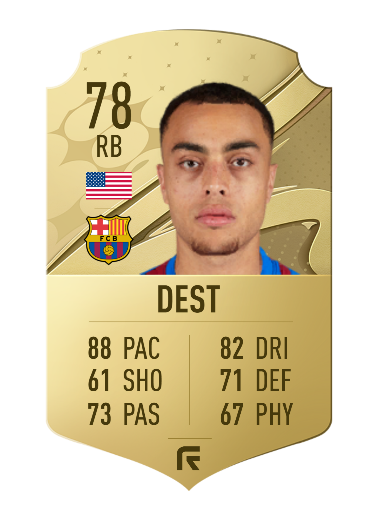 Sergi Roberto: A player that Xavi values. 20-21 season was a poor season from Roberto, but he was injured for a while. The same pattern continued last season, as Roberto was injured and is just recently returning to football. I would say a downgrade is deserved in FIFA 23. 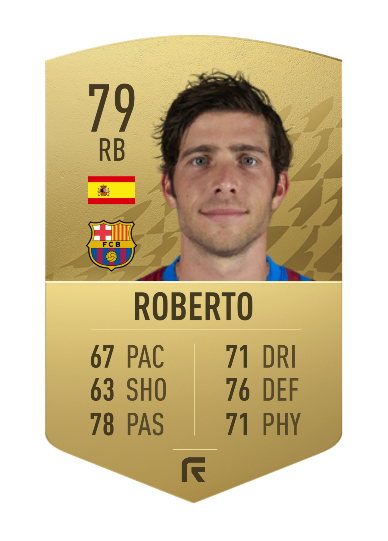 Araujo: Easily one of Barca’s best players, and maybe even the best player for Barca last season. Araujo showed his versatility with his ability to play as a Right-Back and left-back when needed. His ball-playing ability is still a bit below the bar, but he is a defensive monster, and played at his best in almost all matches. He certainly deserves a massive upgrade, and we all know he will get it. 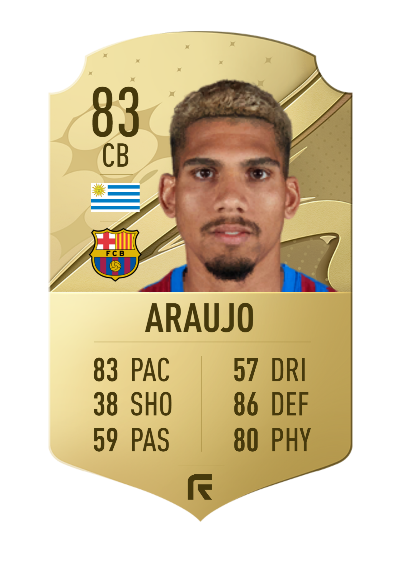 Pique: Pique was not at all bad last season, he was impressive when he played, sometimes he did create some mistakes which led to goals, but he was solid. His ball distribution was top notch as always and it was vital for Xavi. Pique should be in the lower 80’s due to his age and the level he plays. Yes, he has played well but he doesn’t play like an 84 rated player. 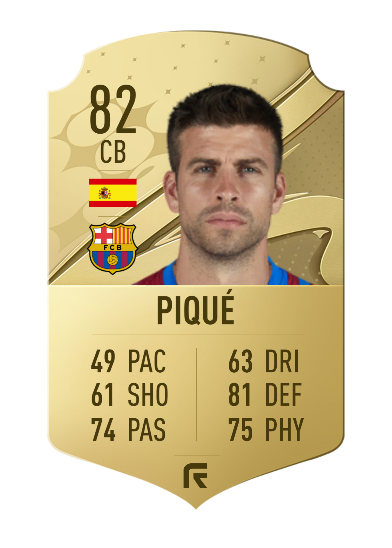 Eric Garcia: Had a rough start to the season, but slowly picked up momentum leading to the end of the season. In the third quarter of the season he impressed me a lot, and I think he deserves a small upgrade. Solid rotation/squad player for Xavi. 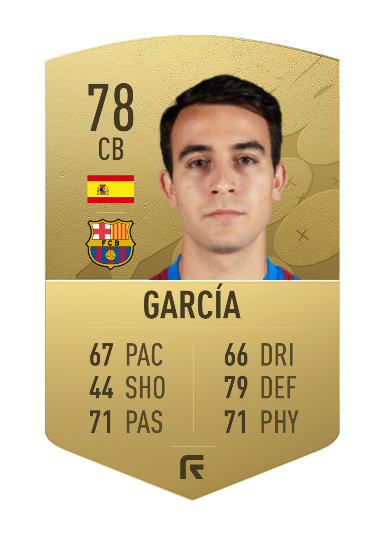 Christensen: As a Chelsea player last season, Christensen did good. In Tuchel’s back 3 system, he played as the right centre-back. He is a pro-active defender who always goes up, complimenting Tuchel’s high defensive line. His ball distribution and progression are also one of his good attributes, and something that may have seduced Xavi. I think he deserves an upgrade; a player of his calibre should be 82 on FIFA 23. 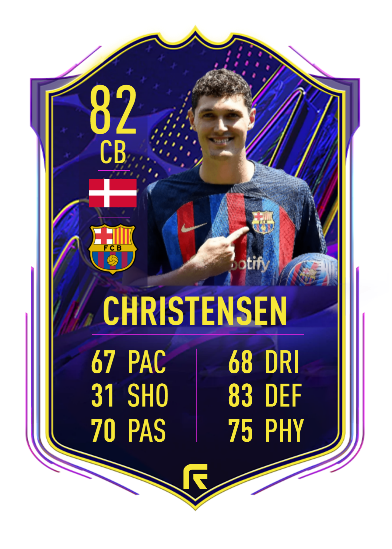 Kounde: Easily one of the best La Liga centre backs last season while playing for Sevilla. He easily deserves to be in the mid 80’s. 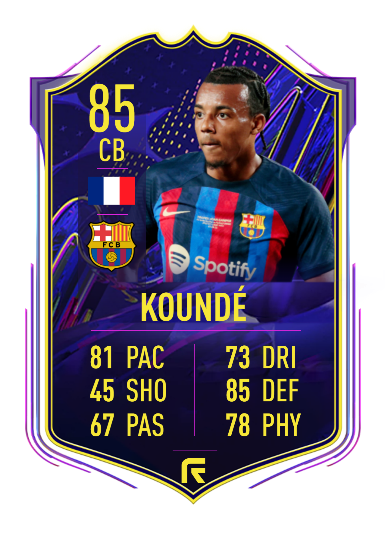 Busquets:  Sergio Busquets had a decent season, nothing amazing nor bad. I would say a rating around the lines of 83-85 would be spot on. He is aging but still important for Barca and Xavi for now. 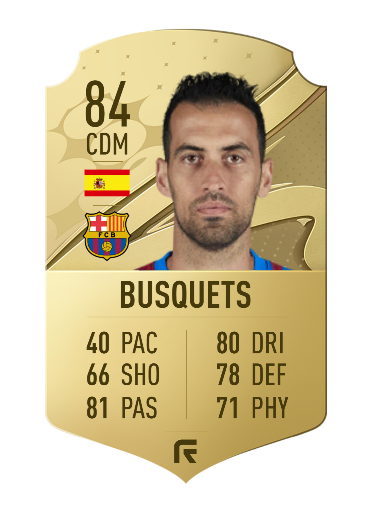 Pedri: Barca’s ‘Golden boy’ has himself up for a small upgrade in FIFA 23. It’s small, not big since he missed two thirds of last season. But whenever he played, he was superb. A huge difference maker for Barca and Xavi, and he lit up the stage. You could see the difference he made in the final stretch of games last season. Pedri was 81 rated in last year’s FIFA, so I think 83 is a fair rating for him. 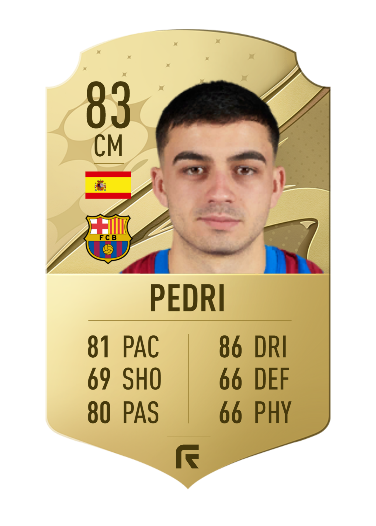 Frenkie De Jong: After a promising 20-21 campaign, last season didn’t go as well as planned for Frenkie. It was a sort of a mixed season for him. He had his moments, one memorable game was the UEL playoff round second leg vs Napoli, in which he was phenomenal but then comes games where he disappeared and was just useless. A player of Frenkie’s calibre and skill being inconsistent is quite sad. His future is uncertain, but as of now he is more inside than outside of Barca due to his determination to stay and succeed at the club. Despite last season, he is still one of or even is the best midfielder at the club. With all that in mind, I think he could be downgraded to 86 or stay at 87. 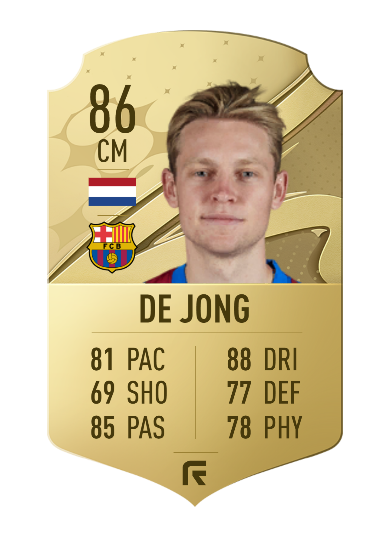 Gavi: The young teen who took Spanish football by storm, Gavi is most possibly in line for a huge upgrade. He was good last season in most of the games he played considering his young age. He still has a lot to work on and is still a not starting level player for Barca, but he is definitely a gem. 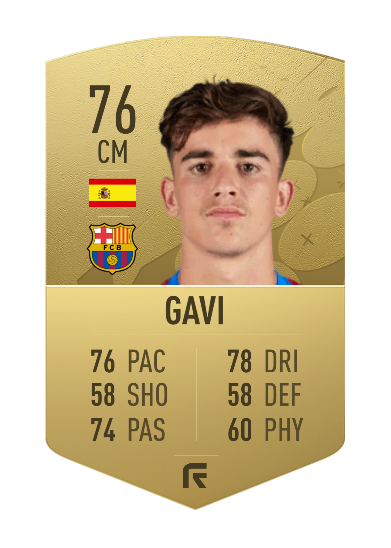 Pjanic: After Pjanic’s nightmare 20-21 season in where he was unfairly benched by Koeman for almost all season, he left on loan to Turkish giants, Besiktas. Honestly I don’t know much about how he performed in Turkey, but based on reports he ‘has not excelled’ which is probably a factor why Besiktas didn’t want to make Pjanic’s loan a permanent deal. However, in preseason Pjanic impressed fans, critics and most importantly Xavi. With Nico’s departure and a potential salary reduction, the Bosnian is most likely Busquet’s backup for the season. 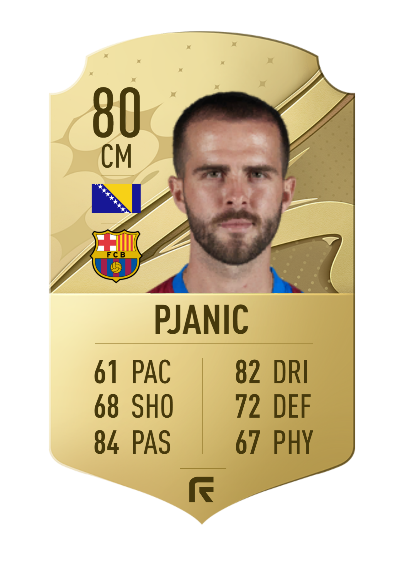 Kessie: One of Barca’s many signings of this summer, Franck Kessie was an important player for AC Milan’s scudetto win last season. For Xavi, he brings the team a physical profile which the midfield needs a lot, some games like vs Bayern Munich last season demonstrated that Barca needed physicality, many players were getting dominated physically in the middle of the pitch. Kessie brings that and as well as many other qualities on the pitch. 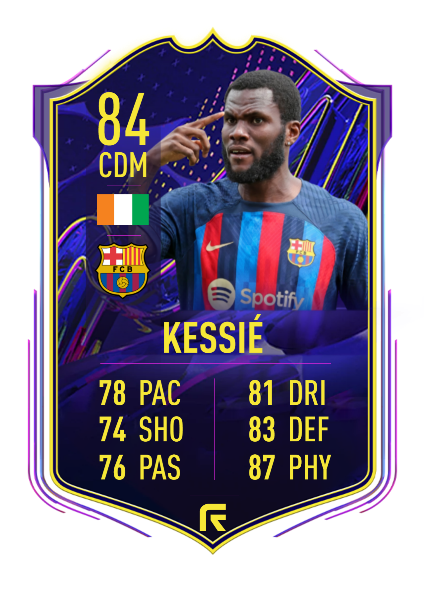 Ousmane Dembele: One of Barca’s biggest threats in attack, could be in line for a decent upgrade. He was top assister in La Liga, as he assisted 13 times. Dembele even under harsh circumstances on the pitch against the fans and a contract saga which had us all on the edge of our seats. Xavi revived the Frenchman (once again, don’t forget Koeman’s mini purple patch with Dembouz in 2021) and gave him a role, which was something most managers didn’t do, they didn’t use him to the best of his abilities and responsibilities which stalled his progression. He certainly deserves a +2 upgrade. 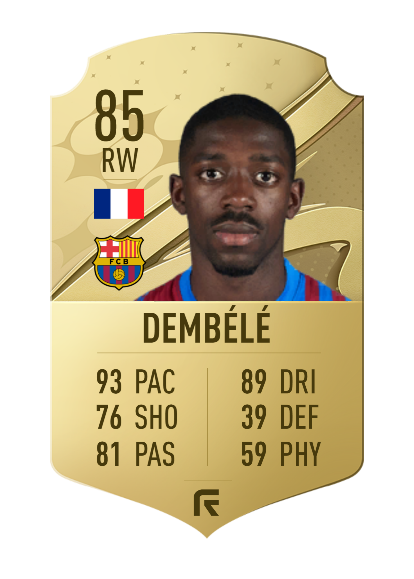 Ferran Torres: Barca’s statement signing to show that they ‘are back’ under Laporta, had a rough but promising season. He sure did miss a lot of chances which were pretty easy to score, but he did show promise. Considering his age he has a lot of time to prove himself and I am sure he will. His profile is needed in the side. He can drag out defenders and can get into positions to threaten the opposition. He should stay as an 82 overall in FIFA 23. 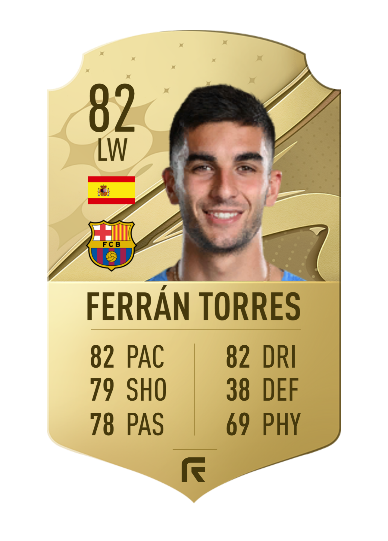 Ansu Fati: Injury after injury after injury… Fati has had quite a lot of setbacks last season and it frustrated him and the fans. His unluckiness off the pitch still didn’t hold him back from scoring goals on the pitch. It’s obvious the injuries have affected him a bit physically, but he still looks quite useful and a threat towards the goal. He is 19 years old, and with time he will live up to his name and the number 10. He 100% deserves an upgrade. 76 for a player like him is a joke. 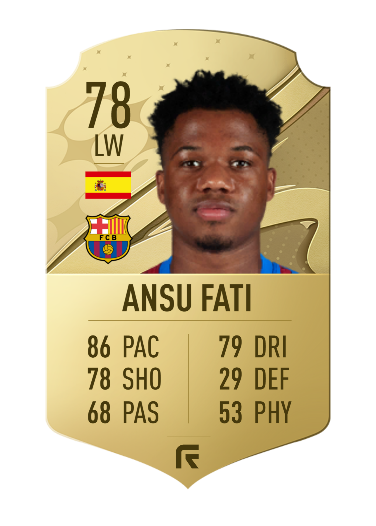 Raphinha: Barca’s new Brazilian had an impressive season at Leeds United being their driving force that led to their Premier League survival. He scored 11 and assisted 3 times last season. A good boost in rating for him is waiting. 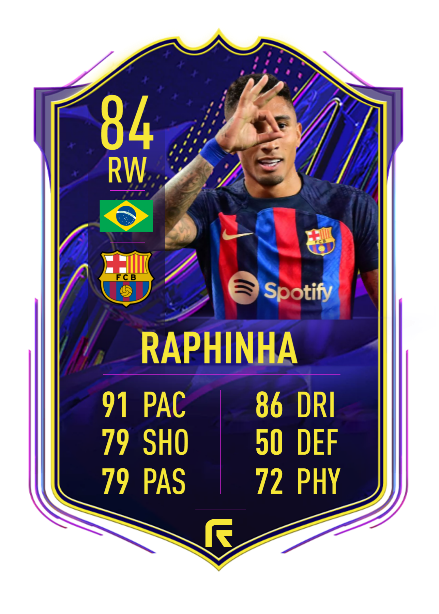 Lewandowski: Months ago, none of us would’ve seen this coming, Robert Lewandowski is a Barca player. There isn’t much to say about him as last season he secured the European golden boot with 35 goals. Not to forget he scored 13 goals in the UCL, on TOP of that. He deserves to stay as 92 overall, and no one can disagree on that. He was overshadowed by Karim Benzema’s stellar Ballon D’Or worthy season, but Lewandowski was certainly on his level. 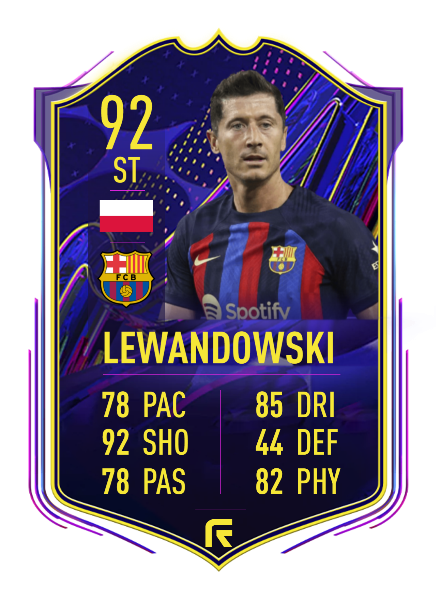 Barcelona and Chelsea to hold final meeting for Aubameyang