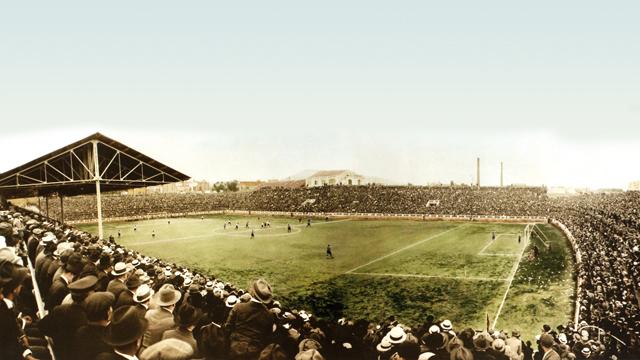 During the 1920s, football became a sport of the masses. Supporters came to see Barça idols, such as Samitier, Alcántara, Zamora, Sagi, Piera and Sancho. That was the rising of the first Barca dream team.

This legendary team saw a growth of its fan base, which “prompted” the construction of the football ground at Les Corts, in 1922; this was the first great Barça stadium. By 1923, the Club had in excess of 10,000 members.

Matches played against Barcelona’s other team, Espanyol, Barça’s biggest rival at that time, met with great expectations from devoted football fans, who followed the team to all its matches. The team enjoyed many years of success at the Les Corts football ground. 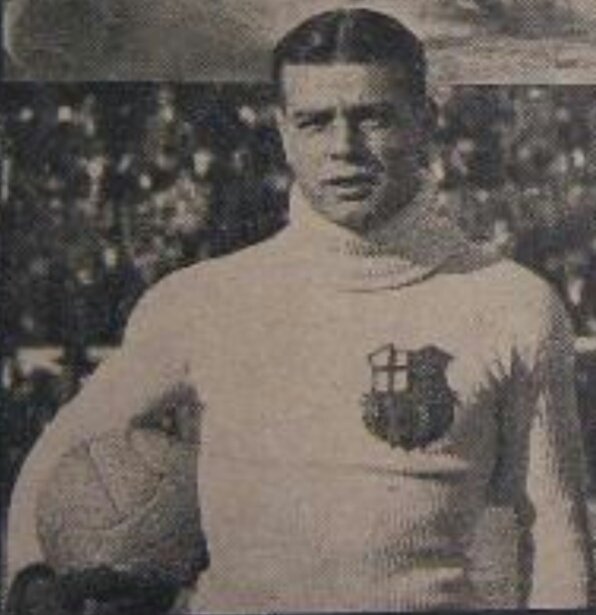 ‘El Diví’ (the Divine one) was the nickname of Ricardo Zamora, who made a great impression despite only playing three seasons as a goalkeeper. Until now we consider him as one of the greatest in the position in the Club’s history. He made his debut alongside Samitier in 1919 and both players mark a before and after in the sporting story of FC Barcelona.

JOSEP SAMITIER BURSTS ON TO THE SCENE

“Home llagosta” (lobster man) was the nickname of Josep Samitier because of his acrobatics on the field. He was the first major idol of Catalan football. Also, he became a society figure and was often seen alongside artists like Carlos Gardel and Maurice Chevalier.

The stadium at Les Corts, opened on 20 May 1922, was the scene of the Club first expansion and golden age. It was one of the best football grounds in Europe at that time. Designed by Santiago Mestres and Josep Alemany, the ground cost a total of 991,984.05 pesetas. It had an initial capacity of 22,000 spectators and successive enlargements tripled this capacity to 60,000. The Les Corts football grounds witnessed three decades of hope and glory, but also saw less successful periods.

FC Barcelona celebrated its 25th anniversary on 7 and 8 December 1924, with two matches against Real Unión de Irun at Les Corts football ground. The occasion was also marked by the “III Challenge Pere Prat” race, in addition to an athletics convention with Spanish and French representatives. At that time the Club had 12,207 members.

CUP TRIUMPH IN 1928, THE MOST CELEBRATED TITLE

The most significant victory of the decade was the Spanish Championship (Copa del Rey) final in 1928. At the final, which took place in Santander, Barça beat Real Sociedad (3-1), after the first two matches ended in a draw. The goalkeeper, Plattkó, suffered serious injuries during the match and was the day’s hero. For the first time ever, Barça’s victory was broadcast on the radio and the newspapers published special editions.

On February 12 1929, a new competition began: the League. In only a few years, this competition would become the championship par excellence of Spanish football. It lasted four and a half months and FC Barcelona was the first champion with twenty-five points, two more than Real Madrid, which finished in second place. Manuel Parera had the honour of being the team’s first goalscorer in the Spanish League. However, the fans didn’t celebrate this victory with great enthusiasm at the time, as football fans thought that the League was an insignificant competition. In any case, the Club’s record in that golden decade was extraordinary with eight Catalan Championships, five Spanish Championships and one league title.

The toughest moments experienced by FC Barcelona football club were the initial post-war years. The Club reached a point where it almost ceased to exist. The team formation in subsequent years, however, led to more promising title victories in the 1950s. For many people, Barça’s matches at Les Corts represented an oasis of freedom during years of fear, misery and repression.

LIFE AFTER THE CIVIL WAR

After the war, FC Barcelona experienced terrible times of social, economic and sporting hardships. The team did not have enough players and a bomb dropped by fascist air forces had destroyed the Club’s headquarters. It was time to start anew. The new political dictatorship distrusted Barça, viewing it as an organisation that was committed to the Republican cause and Catalan nationalism.

The Les Corts grounds officially reopened for a match on 29 June 1939. Various military and civil authorities presided  the match. Speeches were given proclaiming that the Club would cease to be a vehicle for anti-Spanish sentiment and would become a Spanish sports icon under the new regime.

THE ARRIVAL OF CÉSAR

With the upheaval of the war over, two players who would be pivotal in the coming years arrived: César Rodríguez and Mariano Martín. César was one of the great goalscorers in Barça’s long history. He made 456 appearances for the team and scored 304 goals. He made himself famous for his diving headers from corners, many of which ended up in the back of the net. Some years later, the arrival of Estanislau Basora, one of the best wingers ever at Barça and Antoni Ramallets, for many the best goalkeeper in the Club’s history – Bolstered the team.

THE RETURN OF SAMITIER

Josep Samitier’s contribution to Barça was not limited to his outstanding performance as a player. In 1944, he began an important stage as team manager. With Samitier in charge, FC Barcelona won the 1944-45 Spanish League. It had not won the title since 1929.

The 1948-49 season saw Barça win the Latin Cup, their first ever European title. The competition was organised by FIFA and the precursor to the European Cup. Finalist teams from France, Italy, Portugal and Spain played for the Cup. In 1949 the participating teams were Stade de Reims, Torino and Sporting Clube de Portugal. FC Barcelona beat Sporting in the final with a 2-1 victory.

The Club’s 50th anniversary coincided with a time of great success, and the Club’s awareness that it had recovered from the Civil War. At this time, FC Barcelona underwent a period of growth, and had a total membership of 24,893. A series of events and a three-way football tournament, between Barça, Boldklub from Denmark and Palmeiras from Brazil commemorated the Club’s foundation. Barça won the tournament.

Taking full advantage of this anniversary celebration and thanks to an intiative from member Salvador Grau Mora, the Club reinstated the four stripes of the Catalan flag that it had been forced to remove from its coat of arms. This was a clear demonstration of its desire to recover its identity, despite the limitations imposed by the existing circumstances. The massive turnout of Barça followers at the celebratory events that took place at Les Corts made it clear that the Club had outgrown the legendary stadium.

BACK TO BACK LEAGUE TITLES

The Uruguayan Enrique Fernández, who had played for Barça before the war, managed the team for three seasons, which resulted in two consecutive Spanish League titles in 1948 and 1949. Fernández used tactics based on attack, which were to the liking of Barça fans.