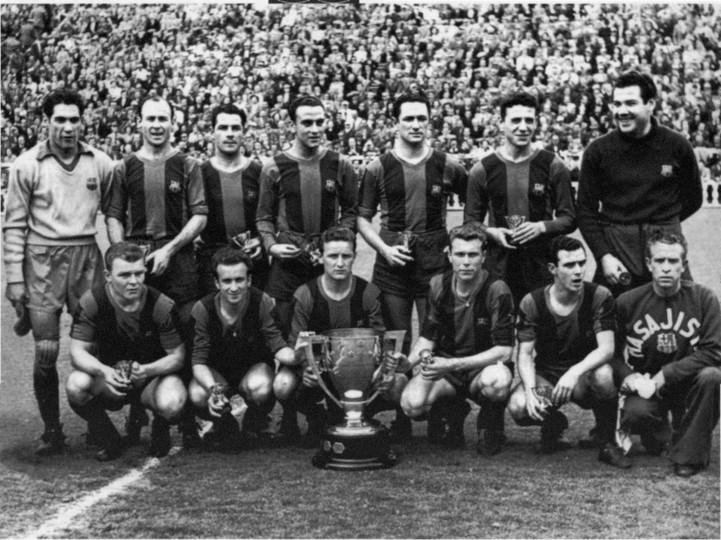 Ladislao Kubala’s arrival played a significant role in Barça’s successes, and he became an idol for Barça fans. The team’s victories and the legendary Kubala were key factors in gaining fan loyalty. Barça became increasingly important in Catalan society.

The Club needed a bigger stadium. In 1953, Miró-Sans’s electoral campaign slogan “We need, we want and we will have a new grounds” was decisive in his becoming the new president of Barça. The construction of the Camp Nou was an affirmation of the organisation’s drive towards modernisation.

KUBALA THE HERO OF THE DECADE 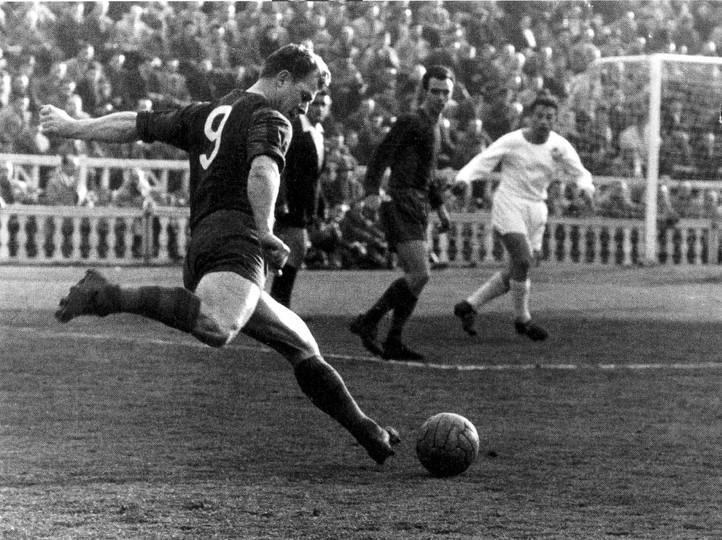 Josep Samitier, the Club’s technical secretary, brought Kubala to Barcelona. He was a player that would change the history of Barça and who became legendary amongst the Club’s fans. The Hungarian genius introduced new football techniques that had not been seen before, such as curling the ball. The team’s spectacular football allowed them to dominate Spanish football and also shine in Europe.

THE BARÇA OF THE ‘FIVE CUPS’
From 1950 to 1953 the Club dominated. Barça’s sensational line-up during the 1951/52 season led it to win five different trophies: the League, the Spanish Cup, the Latin Cup, the Copa Eva Duarte and the Copa Martini Rossi. The Five cup team had a legendary forward line. This was his team: Ramallets, Seguer, Biosca, Segarra, Gonzalvo III, Basora, César, Kubala, Moreno and Manchón.

THE DI STEFANO CASE
In 1953, FC Barcelona signed Di Stéfano after reaching an agreement with River Plate, the club that owned the rights to the player. At the same time, Real Madrid carried out negotiations with Millonarios, the team that Di Stéfano was playing for then. A strange federative manoeuvre with Francoist backing stipulated that Di Stéfano should play alternate seasons with each club. Barça went against the verdict and relinquished the player. Kubala’s Barça and Di Stéfano’s Madrid competed for many years for the domination of national football.

THE SIGNING OF LUIS SUÁREZ
The arrival of Luis Suárez in 1954 would further strengthen one of the best teams in history. He was an exceptional player who brought moments of great joy to the Club. In 1960, as a Barça player, Luis Suárez won the Ballon d’Or. To this day, he remains the only Spanish player to have won the award.

The Camp Nou building works began in 1955 and were completed two years later. The grounds were inaugurated during the presidency of Francesc Miró-Sans, on 24 September 1957, on the day of La Mercè, Barcelona’s patron saint. Different celebratory acts took place at the inauguration ceremony, which included a match against a selection of players from Warsaw. Barça enjoyed its first victory in the stadium, 4-2. Paraguayan striker Eulogio Martínez scored the first goal.

The stadium had an initial capacity of 99,053 spectators. The total cost of the Camp Nou was 288,088,143 pesetas. Today, Camp Nou is the stadium with the largest capacity in Europe, accommodating 99,354 spectators.

Helenio Herrera’s arrival at Barça in 1958 meant that the understanding of football changed in a revolutionary way. Historic utterances such as “we’ll win without getting off the coach” and “with ten our team plays better than with eleven”, led the team to become a renewed formidable force.

Herrera, known as ‘HH’, put together an extraordinary team made up of foreign and Catalan talent. The team’s newest idols were once again Hungarian: Sandor Kocsis and Zoltan Czibor played alongside Eulogio Martínez and Evaristo. The team also included local players like Gensana, Gràcia, Vergés, Tejada, Olivella and Segarra. That formidable line up won the league title in successive seasons as well as a Copa del Rey and a Fairs Cup.

Valverde's options for 'El Clasico' - Who will replace Leo Messi?