The FC Barcelona Journey started in 1899, by young people from europe, who lived in Barcelona. In those days the popularity of football increased, and it was only a matter of time until a football club would be founded in a city like Barcelona.

The founder of the club was Joan Gamper, who filled the role of the president, while also being a player and a director. Gamper (Winterthur, Switzerland,1877 – Barcelona, 1930) came to Barcelona in 1898 for professional reasons. In his free time Gamper played football with his friends. In October 1899, Gamper placed an ad in Los Deportes magazine in order to form a football team.

On the 29th of November 1899, Gamper came to the Sole Gymnasium, along with eleven men: Otto Kunzle and Walter Wild from Switzerland; John and William Parsons from England; Otto Maier from Germany; and Lluís d’Ossó, Bartomeu Terradas, Enric Ducal, Pere Cabot, Carles Pujol and Josep Llobet from Catalonia. And the name of the club was: Futbol Club Barcelona.

The first few years of the club were tough, and by the end of 1908 the club had just 38 registered members. Gamper insisted on keeping the project alive. and became the president of the organisation for the first time. The next years were a new era for the club, in various roles: Steady growth of its members; The re-writing of the club statues, and for the first time owning the club’s home ground. At the same time, a range of sporting successes and growing recognition accorded to players saw football develop into a mass phenomenon, turning it into a professional sport.

The number of members increased rapidly from 201 in 1909 to 2,973 in less than  decade. At the same time, Barça laid down solid foundations in order to define the style of football club it wanted to have. This took it beyond the original dream of the group of friends that had founded it in 1899; the Club was here to stay.

Carrer Indústria’s field was the team’s home from 14 March 1909 until 1922. This Two-tier stadium with capacity of 6,000 spectators was the first of its king in Spain.

Barça fans associate these football grounds with the origin of the nickname “culers” (literally “arse-people”), used to refer to supporters of FC Barcelona. Far from being offensive, the name refers to fans seated in the highest row of the stadium. From outside, people who passed by could only see their backsides.

During four seasons from 1909 to 1913, the Club won three Spanish Championship (also known as the Copa del Rey) and four Pyrenees Cups, which was the first international tournament that Barça played in. Teams from Catalonia, the Basque Country and the south of France played in this competition.

The firts celebrations were held from Passeig the Gracia’s station and since 1909 the Canaletes drinks stand, in the centre of Barcelona, became the place where football results were announced. Fans have congregated here ever since to celebrate Barça’s successes. 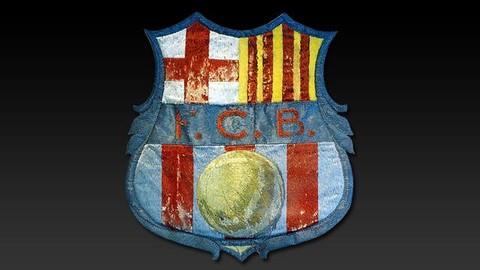 The Club held a competition to choose a new design; the result, with slight modifications, is the badge we know today, and was designed by Santiago Femenia. The design is representative of the Club’s identity. It features the St. George’s Cross and the four stripes of the Senyera, the Catalan flag. The Club’s colours, blue and claret, also appear with a football in the centre.

Paulino Alcántara,  who was originally from the Philippines, played his debut season in 1911-12, at the age of just fifteen. He is, without doubt, Barça’s first star player and the Club’s top goalscorer until the arrival of Leo Messi. He scored a staggering 369 goals in 357 matches, representing an impressive average of one goal per match. It is said that his kick was so powerful it could rip through the goal net. Alcántara always wore a white scarf tied round his waist.

The 1908-1909 season marked the beginning of FC Barcelona’s dominance in the Catalan Football Championships. By 1919, Barça had won the title five times, with the highlight coming in 1909/10 when the team won all their matches.